What can you do with that extra bedroom in your house? How can you breathe new life into the living room? Well, inspiration comes from the unlikeliest places you can imagine, that’s what every creative person will tell you, and it’s true. But it can also come from the most obvious places, like the many, many TV shows that focus specifically on home remodeling and interior decoration, and that you’ve probably skipped a thousand times before until now.

As it turns out, while not step-by-step instructions on what you should do inside your own house (as that would prove quite expensive), you can take some ideas and apply them differently. We’ll tell you which are the best home renovation shows on Netflix and elsewhere on the internet so you can binge watch them and get some fine decoration ideas along the way. Here are our top picks!

A Netflix original reality series, Stay Here follows interior designer Genevieve Gorder and real estate broker Peter Lorimer as they transform people’s short-term rentals into 5-star spaces all around America. The focus on the show is on spaces destined to be rented out and make money, but the results on most of them will surely make you wish that spare room in your house could look like that (and it can!). The places showcased over the season are very different from each other, so you’ll definitely find one compatible with your tastes.

Design on a Dime – HGTV

Sure, any newly-remodeled bathroom looks great on TV after pouring tens of thousands of dollars from the show’s budget on it, but can you make any room look that good while staying accessible price-wise? Design on a Dime, HGTV’s decoration-oriented show, says that you can and with only $2,500 (originally just $1,000 on the first episodes). Thanks to that, the show is full of tips that most people will be able to use in their own houses.

Most home decor shows have made us grown accustomed to the idea that a full-scale home renovation is a 45-minute affair, wrapped in a nice emotional bow at the end. If you want to see something more in-depth and with a slower pace to take in all the work that’s being done, This Old House will charm you. Instead of a house per episode, this series tackles a single project over several episodes, so the transformation feels more impactful in the end.

A bona fide classic of the early 2000s, this mix of cool design ideas and unexpectedly human drama was rebooted back in April 2018 with some new talent, featuring an updated stylistic sensibility while keeping the nail-biting reactions of the final reveal for each episode. For those unfamiliar, the show revolves around two sets of neighbors working with professional designers to renovate a single room of each other’s house. The results can sometimes be deliciously melodramatic, and it’s good to pick up a couple of decor tips.

Running for almost 20 years, Curb Appeal is especially appealing because it keeps alive the idea that even a minor change, like painting your fence or landscaping your yard, can increase the appeal and value of your property. This means that there are plenty of tips for making the outside of your home more beautiful without the need for a massive overhaul, and host John Gidding’s charisma will make binge-watching a whole season feel like a breeze.

Tidying Up with Marie Kondo – Netflix

Yes, this might not be precisely about remodeling, but it does feature a very transformative process for your house that costs exactly $0: Keeping things organized. There’s just something very appealing about the way Marie Kondo presents her method which, if on the hands of a less charismatic presence, could very well just be “a woman tells you to clean up a room.” Regardless, this could be considered one of the best interior design shows in 2019, because the central idea is both useful and beautiful; no amount of remodeling and redesigns will make you love a room if you don’t “see” its full potential under the mess!

We hope that you find the tips and ideas in these shows both entertaining and informative. While some might be harder to binge-watch than others (you’ll see what we mean after watching and emotionally taxing negative reaction in Trading Spaces), they’re all good inspiration for picking up the toolbox or calling that contractor and getting that project you’ve dreamed about for so long become a reality.

GET UPDATES No charge. Unsubscribe anytime.

GET UPDATES No charge. Unsubscribe anytime.

Next: Choose a Service

Great! Few details and we can complete your booking. 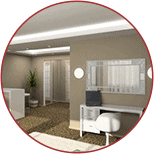 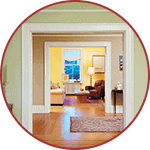 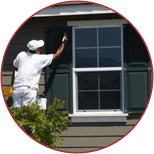 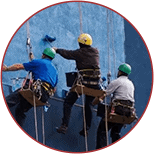